opEvents has the ability to forward events based on filters to another server running opEvents (or other service desk systems, like Servicenow and Connectwise).   This is used as part of the Opmantek Multi-server architecture with distributed pollers and centralised primary servers,  it is also extremely useful in situations such as an opEvents instance not being reachable across the internet, but another central instance of opEvents is reachable.

Events are forwarded using http or https which is setup separately on your server, independent of opEvents. A typical Apache SSL configuration works just fine.

Configuring SSL on apache for NMIS and OMK

We're assuming you already have a poller running NMIS and opEvents along with another instance of opEvents setup, configured and working.

This functionality is intended for users with advanced knowledge of NMIS and opEvents.

If you need HTTPS security, this should already have been configured (see link above).

Disable Auto Acknowledge of Up Events

The opEvents engine will normally auto acknowledge up events as they are clearing a down event, to make this solution work you will need to disable this feature.

Verify and if necessary modify the configuration file /usr/local/omk/conf/opCommon.json and change the setting opevents_auto_acknowledge_up to be false.  You will need to restart the opEvents Daemon (opeventsd) for this change. 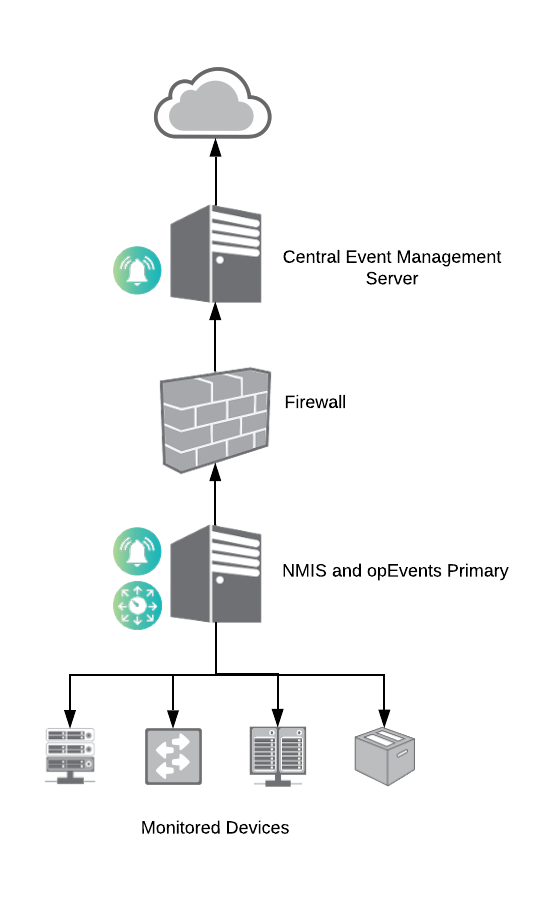 To enable this functionality, you must edit the opEvents "Event Actions" JSON file. We recommend using the web GUI to do this as there is a very handy "Validate" button that can be used to ensure your configuration changes are indeed valid JSON and won't break opEvents. If you must, you can also edit the JSON file directly at /usr/local/omk/conf/EventActions.json file. Beware that making changes that result in an invalid JSON file will result in your actions not functioning as intended.

Validating a JSON file on the command line can be done using the command:

Certain node properties must be defined in opCommon.json in order for opEvents to make use of them. In earlier versions for example, group and location were at the root level. These are now under configuration so should be defined as below.

This is mostly of relevance to customers who have upgraded from opEvents 2.x and if you already have opEvents 4.x running successfully, it likely is simply something to double check.

Also check for similar naming in conf/EventRules.json, ie: node.serviceStatus is incorrect. It should be node.configuration.serviceStatus.

Again, this is mostly for those users setting up opEvents after upgrading from an earlier version.

Just something to double check and be aware of.

There are a few sections in EventActions.json, but the one we're concerned with first is the policy section. Entries in a given section are numbered for determining the order in which they are processed. Usually we make forwarding the last entry (the entry with the highest number).

First we want to check all events and filter them in sub-sections. This just makes things easier for a human to read and understand. So our IF section at the first level is a simple node.any and event.any. For any node and any event. The THEN section is again numbered for order, that will then be processed.

Tag any up events

Next we need to decide which events we would like to send to the second instance. We're going to send (for the purposes of this example) all events with a node that has a serviceStatus of 'Production'.

These events will go into a second list, inside the top level.

Also, we should send all 'Node Up' or 'Closed' events to the second instance, regardless of the node so it cancels out any escalation. It does not matter that no 'down' event might not have been sent previously. So our JSON will now look like the below.

And one final item - the first thing we'll do is add two tags - escalateToCentral and sendToCentral. Adding them regardless of the event will allow the tests later on to check the values without throwing warnings in the logs because those tags don't exist.

Below we have added the tags and checked for any Node Up or Closed events.

You may also have noticed the 'up|closed' entry. These entries take perl regular expressions, so in this case if up or closed is present in the event/state, it will match and trigger the THEN.

Next we'll add an event that we want to escalate. Let's check if the serviceStatus is production and if so, tag it for escalation.

That's all we'll bother with to keep things simple.

Next we need to check the tags and if required, escalate or send it to the second instance.

As you can see, we reference two different routines in the THEN sections for #30 and #40.

For the THEN action escalate.central in #30, we are simply checking if the event has a priority high enough to send and our hours of operation correspond. If it does, send it. This is defined in the escalate section of JSON.  The 360 refers to the escalation to take place after 360 seconds has passed.  Implementing like this will prevent flaps and noisy events from going to the central server.

Any 'script.X' THEN items are defined in the script section of EventActions.json - hey, big surprise, I know

For #40, we don't bother testing for a priority, we just send them. This is because events such as 'up' or 'closed' have low priority - but obviously we want to send them to cancel and 'down' type events.

So our script blocks looks as below.

If you wish to not include your username and password in the Event Actions file, you can use a wrapper script.

Create a script e.g. /usr/local/omk/bin/create_remote_event.sh and make the ownership and permissions for root only.

The contents of this script would be:

Event Actions Script would be updated as such

You have selected events to be forwarded and tagged them. Tested those tags for actions and depending on the tag and priority, forwarded it to your central instance.

So for future versions, you might define an event on a node with serviceStatus of "Testing" and choose only to forward it during office hours (for example). Give it a different tag, check that tag and use escalate with an additional item (say "testing_office_hours_central"). The ways to configure opEvents really are limited only by your imagination.

Hopefully this article has given you some ideas and pointed you in the right direction.