Click the Submit button and you will be show the discovery details page. Click the Execute button (looks like a "play" button) in the top right button toolbar and the discovery will start.

You will be shown the logs section on the discovery details page. The page will refresh every 20 seconds while the discovery is running. You can cancel the refresh by clicking the X button in the panel header.

When you create a new discovery if you click the Advanced button, you have many more options to change, one of them being the type of discovery.Types have always been Subnet (encompassing the above range, subnet, ip options) and Active Directory. As at v4.1, Open-AudIT has a new discovery type called Seed.

A Subnet discovery will scan the IPs provided.

A Seed discovery uses an initial IP to retrieve the IPs of any other devices it knows about, adds those IPs to the list and scans those - again asking for any IPs those additional devices knows about. Rinse and repeat. It is intelligent enough to know if it has already scanned a given IP in its execution and discards any already scanned (or even on the list to be scanned).

Once you click the execute button, Open-AudIT will spawn a process to initiate the discovery and return the user to the discovery details page. The newly spawned process takes the configured discovery options and executes Nmap commands to determine the initial list of IP addresses to be scanned (or queries Active Directory if that type is used). Each IP to be scanned is placed into a queue. Once the initial process has completed (and there are IPs to be scanned in the queue) a number of processes will be spawned to further scan each IP in parallel. This number of processes is configurable in the configuration, edit the attribute "discovery_limit". By default this is set to 20.

For each spawned process, the below occurs.

Each IP is scanned with the discovery configured options (see Discovery Scan Options and Discovery - Community vs Professional vs Enterprise). In general, Nmap will test for ports 22 (ssh), 135 (wmi), 62078 (iPhone) and UDP 161 (snmp). If 22, 135 or 161 respond the credential list is retrieved and each credential tested in turn. The first working credentials are used for further queries directly from the device. Note - if a device has previously been discovered and has working credentials, those credentials are tested first. Only if those fail are the other credentials then attempted.

The order of information retrieval is snmp, ssh, wmi.

For SNMP Open-AudIT can use v1, v2 and v3 credentials. The device is queried regardless of it being a router, switch (regular network devices) or a computer (Linux and Windows often run SNMP for monitoring tools).

SSH is next on the list and Open-AudIT can use password and key authentication. Open-AudIT can also use a sudo enabled user as opposed to the root use directly (although it can also use root). For best results, the root user or a sudo enabled user should be used (see Auditing Linux without root and Target Client Configuration). Windows devices can also run ssh, however if Open-AudIT detects this it will stop the SSH queries and instead use WMI (assuming working WMI credentials).

Last up is WMI. For Windows as in Linux, a user with Administrator level access is preferred (see Target Client Configuration).

How Long Does it Take

We are often asked this question and the answer most definitely is "it depends". It depends on the number of IPs to be scanned, the network connection speed, the speed of the devices being scanned, the type of devices being scanned, the number of different credentials being tested and the speed of the Open-AudIT server. We do not have a calculator that would allow us to input those variables and return a value. It is simply too complex. Generally I limit my discoveries to 256 IP addresses - ie, a /24 subnet. We have had customers scan /16 subnets (65k addresses) and it does work - but it takes a long time. You are much better off scanning in /24 blocks. If you simply do not know what your address ranges are, then this is a good case for a Seed discovery.

When auditing a Linux device via SSH, some Linux distributions do not allow sudo commands to be passed without a TTY (which we are doing). To completely audit one of these linux distributions it is best to supply the root user credentials. If no root is supplied and sudo without a TTY is not possible, the audit script will be run but will not contain the amount of data as would otherwise. Subsequent audits using root (or run locally using sudo) will therefore provide extra details about the system and generate several "changes".

You will need the ports for WMI on the Windows firewall opened on each target Windows computer. For Windows Core servers, ensure you allow the firewall connections as per - http://blogs.technet.com/b/brad_rutkowski/archive/2007/10/22/unable-to-remotely-manage-a-server-core-machine-mmc-wmi-device-manager.aspx

Outdated below as at v4. 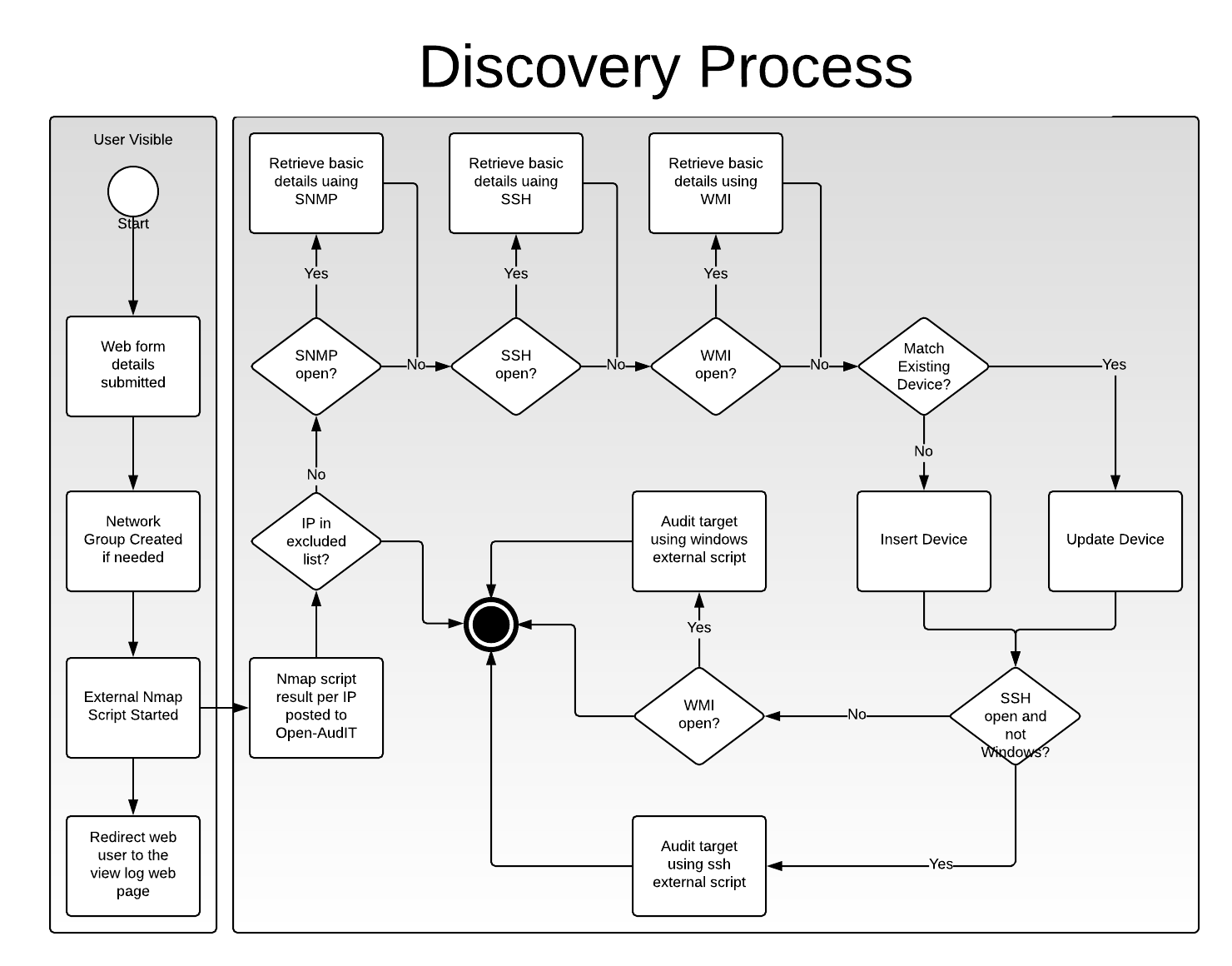