This integration sits between and communicates with Open-AudIT and NMIS. It is designed to work as its own unit of software and makes very few assumptions about your unique setup. The integration only requires as much information about NMIS and Open-AudIT as is necessary to communicate with them.

The following diagram shows the integration running on a single, shared server running both NMIS and Open-AudIT.

As shown above, the integration needs to know authentication details for the Open-AudIT server, as well as the location of the NMIS node admin tool. After that, it manages its own state through a local lookup file.

As your network grows and you add NMIS pollers, you can continue to integrate with Open-AudIT on a per-poller basis by including the integration software on each poller. Each integration has its own set of rules, so it can point to any Open-AudIT server and request only the devices that poller requires. The diagram below shows an example of this architecture. 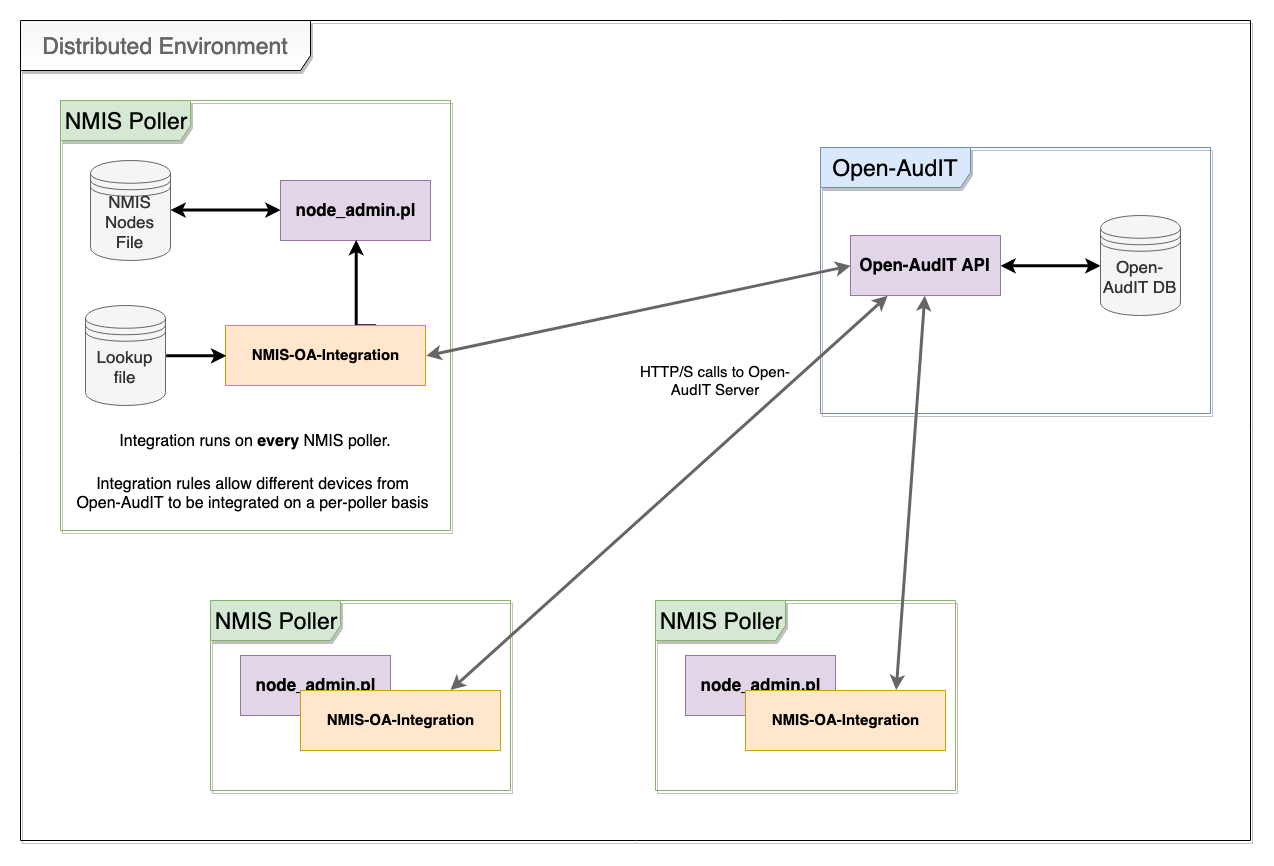 The integration leverages Open-AudIT's query feature as a way of controlling the devices you want to integrate with NMIS. You can create a query specific to your needs, then tell the integration to use that query (by referencing the name or ID). For example, if you wanted to integration only devices running CentOS, you could use the following query in Open-AudIT:

In a scenario where your integration is distributed across multiple NMIS pollers, it's a good idea specify the poller that each device should integrate with. Open-AudIT 3.0.0+ provides an nmis_poller field on devices for this purpose. You could set your devices' nmis_poller field to be the name of a poller (perhaps using Bulk Edit) and then create a query for each poller that matches that poller's name.

You can read about Open-AudIT queries in detail here.

An integration run has the following steps:

The following is a sample configuration file for the integration. The configuration is written in the .nmis format common to other Opmantek products.

The rules file defines how values from Open-AudIT devices should translate into NMIS nodes. The configuration is written in the .nmis format common to other Opmantek products.

Within the rules file, you define NMIS fields and give them a list of candidate values (a ruleset). These values can be either constants (strings), or they can refer to fields from the device itself. The integration will use the first value it can resolve or the empty string if it cannot resolve any values.

To refer to fields from the device, use the format $DEVICE.fieldname.

There is also the option to provide pre-built transformations to fields that apply after they are resolved.

An example rules file is provided below, along with an explanation of how the rulesets might resolve.

The following table shows an Open-AudIT device, a set of transform rules, and the node structure generated after applying the transform rules. These documents have been simplified to make the changes easy to understand.

This section documents the behaviour that can be expected from the integration in special cases such as a node being deleted from one system or another.