Adding a new device to be supported by opConfig

The following was the steps required to have opConfig collect data from a MikroTik CHR device.

Ensure you have access to a device and are able to manually SSH or telnet to it and that you are authorised to do so.

We will need to know:

Looking at the node in NMIS will help you here, e.g.

So access the device and see what happens.  We are wanting to learn how the device works, so we can teach opConfig how to handle it.

Create a Credential Set based on how you logged in

Now you know how you logged in, create a credential set to match this. To do this navigate to menu -> System -> Edit Credential Sets. What is important to note here is that this device only required a single password and does not use a privileged mode (root in Linux, enable in Cisco). So the new setting (introduced in opConfig 3.0.2), is "Automatically Privileged" for this node this should be set to "Yes". 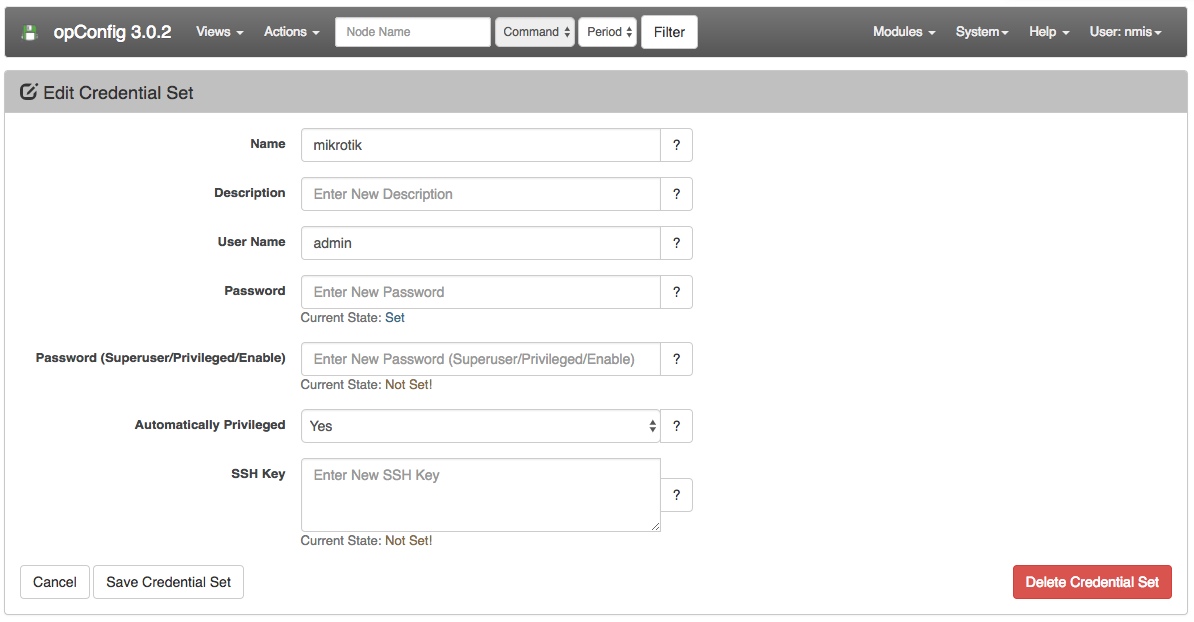 So that opConfig knows the OS of the device (the Command Sets that apply), the personality (phrasebook that applies) as well as other interesting properties, we create an OS rule.  OS rules enable opConfig to automatically set those properties based on devices properties discovered by NMIS.

The file to edit is /usr/local/omk/conf/OS_Rules.nmis,    ( see appendix below for some example configurations).

A quick look at the MikroTik device in NMIS showed that the Description field which is the SNMP variable sysDescr was "RouterOS CHR", this will be the basis for our OS Rule for MikroTik devices.

So we will be setting two properties, the OS (used in command_sets) and the personality (it's phrasebook), the OS tells opConfig which Command Set to use and the phrasebook tells opConfig how to talk to the router with the right phrasebook.    You can also atomatically set other Node properties here e.g. "connection_info.transport" => "SSH".

This rule is saying, if I see the regular expression /RouterOS/ match in the field sysDescr, then set the following properties of the node.

Import the node into opConfig

This feature is not available for opConfig > 4.0.0. As NMIS and opConfig share the same nodes database.

Access the menu in opConfig and import the node, you can do this from the menu "System -> Edit Nodes", then look for the blue button "Import new Nodes from NMIS".

Find the node and edit it in opConfig, you should see a screen like below, this indicates that the OS and personality have been set, you can see them by selecting "Connection" and "OS Info" on the left.  If they are not set, you can edit the OS rule and press the "Refresh Node from NMIS" until they are set.

To tell opConfig how to talk to a device, you need a a phrasebook, this is helping the system to know what to do.

Most of the time, devices behave just like Cisco devices, so you can always try the ios phrasebook, but it isn't too hard to create, we learnt by accessing the device that the there could be a "Login:" and "Password:" prompts, depending on how the system is accessed.

More information on creating a Phrasebook can be found HERE: opConfig custom phrasebook and personality

Test the Work So Far

The best way to test everything is to run a discovery on the node, this will match credential set and test the phrasebook, to run that we would run the command:

Now you need to create a command set to tell opConfig what to collect from opConfig, this is documented in Managing Command Sets