NMIS has a history of being a Network Management System, the generation of the Metrics and now KPI's is something which makes NMIS more than a Network Monitoring System and helps IT professionals with better information about their environment on which to base decisions.

In NMIS 8.5, Key Performance Indicators (KPI's) were added to help see how the health metrics are comparing over time.

Overview of KPI's in NMIS

NOTE: Not all nodes have disk and swap, so for some nodes these values are blank, e.g. a Cisco Router will have no value for disk and swap KPI's.

When a node is polled the current values for the above are calculated and given a score or index and each of these scores is weighted as described in NMIS Metrics, Reachability, Availability and Health to result in the Health Metric.

In NMIS 8.5G we started storing the individual KPI scores so that it was possible to see the health metric break down over time.  This is now shown at the top of a node view panel in NMIS8 and looks like the image below. 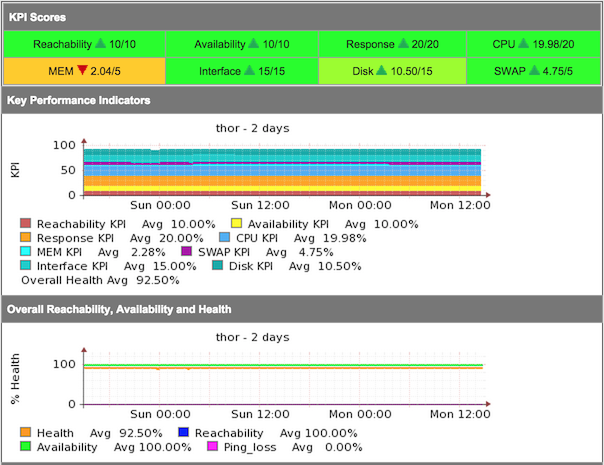 You can think of the KPI Scores like a report card, the student (node) has received 10/10 for English (reachability), 10/10 for Maths (availability) and so on.  The KPI Scores in the screenshot above come from the polled data and are scored out of the weighted value, this weighted value is a percentage, so in the configuration file it is 0.1 which means it is 10% or a maximum possible KPI score of 10/10.  The table below shows the configuration value and the resulting KPI Score value.

Because they are not present in all node types, there are two additional KPI values which overload onto the Memory and Interface KPI values these are, Swap and Disk, these split the weighting of each into half and track that seperately, e.g. Interface KPI by default is 30%, so when the Disk KPI is present the Interface KPI gets a value of 15% and the Disk KPI gets a value of 15%.  So the table would like like this when all 8 KPI's are present, as they are for Linux Servers.

So you are looking at the main NMIS dashboard and you see that a node has a Health score of 92.2% as the example below, there is also a red arrow beside that, which is the result of the longstanding NMIS feature for auto baselining, this red arrow is point down, meaning that the health now is lower than the last period.

So WHY is this node less healthy now than it was before, clicking on the node will reveal the KPI scores and we can start looking at what is changing.

So now we see this KPI summary again, we can see the overall breakdown of the health metric represented in the KPI values and we can see that the MEM KPI has a red arrow pointing down, the auto baselining is showing us that the Memory score is lower than previously with a score of 2.04 out of a possible score of 5.  If we look at the graph of the last 2 days, we can see that the average value for the MEM KPI is 2.28%, showing us that the memory utilisation has increased a little. 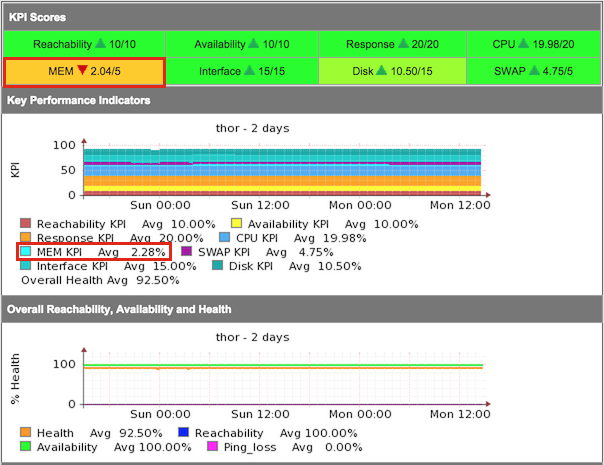 The difference between the result and the displayed numbers are rounding precision.

NMIS KPI Scores are a powerful way to get to the bottom of the health of your infrastructure, they will assist to see where resources are being used and assist to identify operational problems very fast.