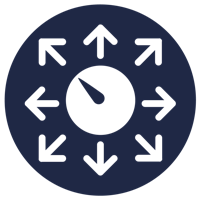 The implementation of the authorisation, limits groups of users by roles to specific things they can view and do with NMIS, and groups of devices/nodes on which they can do it.  This is commonly referred to as role based access control.

The following table lists the NMIS configuration option and the type of authentication which it works with.  These settings are made in /usr/local/nmis8/conf/Config.nmis.

Each of the authentication methods require there own Perl Modules - you can install them with the cpan command and the module name e.g. "cpan Net::LDAP" or you can check if a module is installed with e.g. "cpan -D Net::LDAP"

Configuration of the External Authentications

In the NMIS configuration you can configure multiple methods which are used for auth failure, so if ms-ldap fails, it will fail back to htpasswd for example.  This means if you set auth_method_1 to be ldap and auth_method_2 to be htpasswd, and login with the default NMIS credentials (and you have not changed the password), the authentication for LDAP will fail, and then authentication with the users.dat will succeed and the user will be logged in. The limit for different auth_method variables is 3.

It is important to change your default passwords if you expect any level of security.

When accessing NMIS, you have a choice on how to handle authenticated users who do not have authorisations defined, you can reject them, or you can allow them default access.

This is so that you do not have to define every user in the system if the authentication system is providing a reduced list of users, to have the users become an operator or guest by default and be able to see all groups of devices, the following would apply.

To prevent default authorisation, simply define them as blank, which is the default in the NMIS8 Install configuration.

In NMIS versions 8.5.12G and newer you can configure optional account locking. This feature is not enabled by default as it could be abused for denial-of-service attacks.

If you set the configuration option auth_lockout_after to a positive number N, then the account in question will be locked after N consecutive failed login attempts. If the optional configuration item server_admin holds an email address, a notification email will be sent to the given administrator address.

Locked accounts can be re-enabled from the GUI: visit the System -> System Configuration -> Users page, and click on the option "reset login count" for the locked account.

From the command line re-enabling is also possibly: simply remove the file /usr/local/nmis8/var/nmis_system/auth_failures/<accountname>.json.

A number of problematic corner-cases were discovered and fixed in May 2018, which have unfortunately required certain changes that are not backwards-compatible.
The following table lists the scenarios:

SSO between NMIS and OMK Applications on one system

Both the Cookie Type (or flavour) and Authentication Secret (or key) settings can be changed using the Basic Setup dialog, or the NMIS Configuration dialog (they're in section "authentication").
To gather the Opmantek application secret, you can either open /usr/local/omk/conf/opCommon.json with an editor (look for omkd_secrets), or you can ask the patch_config tool for the value of that setting, like in the following  example:

It is quite likely that you will have to flush your browser cache once after making  these adjustments, to enforce that  no old cookies interfere with the authentication system.

SSO between NMIS and OMK Applications across a whole organisation

To provide SSO for all involved applications, you need to make the configuration adjustments listed in the previous section and all of the following changes:

In NMIS the auth_sso_domain setting can be reached using the NMIS Configuration dialog, under section "authentication".

For the OMK Applications you have to open the configuration file /usr/local/omk/conf/opCommon.nmis with an editor and search for omkd_secrets (under omkd) or auth_sso_domain (under authentication). Please note that you must restart the OMK Application daemon to  activate any changes.

In version 8.6.3G and newer you need to set the Cookie Type  (auth_cookie_flavour configuration item) to "nmis", if you want the have SSO only across NMIS installations.
In older versions that is the only SSO choice.

To activate this feature, you need to

Here's an example of the relevant parts of the configuration file /usr/local/nmis8/conf/Config.nmis:

Please note that two or more periods are required in the domain name, so if your company is AJAX Cleaning and your domain name is ajaxcleaning.com this configuration would be:

When you are accessing the NMIS server after this is configured you must then use the FQDN. In our development labs we use dev.opmantek.com which contains two periods, so we can configure it like this:

Then when we browse to the servers, we use the full name of the server, e.g. nmisdev64.dev.opmantek.com and the login banner tells us that Single Sign On is configured with "dev.opmantek.com", I can enter the password and access the server. 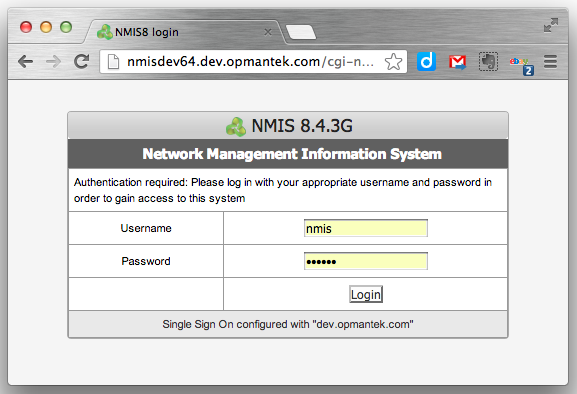 If I were to use the IP address to access the server, authentication will succeed but the cookie will not be created correctly and you will be logged out again.

When NMIS Single Sign On is configured you MUST use the Full Qualified Domain Name to access the server.

Apache (and its htpasswd tool) support a number of different password hashing mechanisms. In the past htpasswd's default mechanism was "crypt" but on most operating systems that has been changed to "md5" (as it resists dictionary attacks much better).

However: NMIS in versions up to and including 8.5G only supports the "crypt" mechanism. This means that you have to explicitely specify the appropriate method when you run htpasswd.

Adding a user for Authentication

To add a new user to NMIS8 (while it is using htpasswd, or Apache for Authentication - and assuming that Apache has not already been integrated with LDAP, Active Directory, Radius, or the like) you will need to create a new Web Based user. This is done using the following commands, using testuser as example:

This adds the user testuser for the purpose of Authentication. Now the application needs to be also told about the users' Authorisation.

User names in many systems are not case sensitive, so NMIS will handle usernames in lower case, when adding users to Users.nmis, ensure that the name is all in LOWER CASE.

At great expense to Opmantek, support for usernames with spaces has been added, this is in the next release to be numbered 8.3.14G or higher.

Setting up a User's Authorisations

Login to the NMIS Portal, as an administration user, the normal URL is http://nmisserver/cgi-nmis8/nmiscgi.pl

Using the menu access "System -> System Configuration -> Users", select "add" from the top right, and then complete the form, specifying the User which matches the user added using htpasswd, specify Privilege and Groups, using "all" if all groups are permitted, multiple groups can be selected.