How to use Open-AudIT Enterprise Discovery on a Subnet

Discovery is a new feature in Open-AudIT Enterprise version 1.3. Discovery will audit Windows and Linux computers, SNMP scan network devices and record active target addresses if no SNMP is active. Discovery runs entirely from the web interface regardless of the Open-AudIT server running on Linux or Windows.

How to use Discovery

To use Discovery, first a few default attributes should be set. Go to Open-AudIT Enterprise -> Menu -> System -> Open-AudIT Discovery Configuration.

The single most important attribute to set the the "default_network_address" attribute. This is used for Discovery so that when we send an audit script to a remote machine we can also provide the URL of the Open-AudIT server for the remote machine to send it's data back to. We set this manually because your Open-AudIT server may have multiple network addresses. Rather than try and work out the correct address, we ask you to complete this step manually so there can be no mistakes.

You should also set the following fields:

Once these have been completed you can go to Open-AudIT Enterprise -> Menu -> Views -> Discovery. 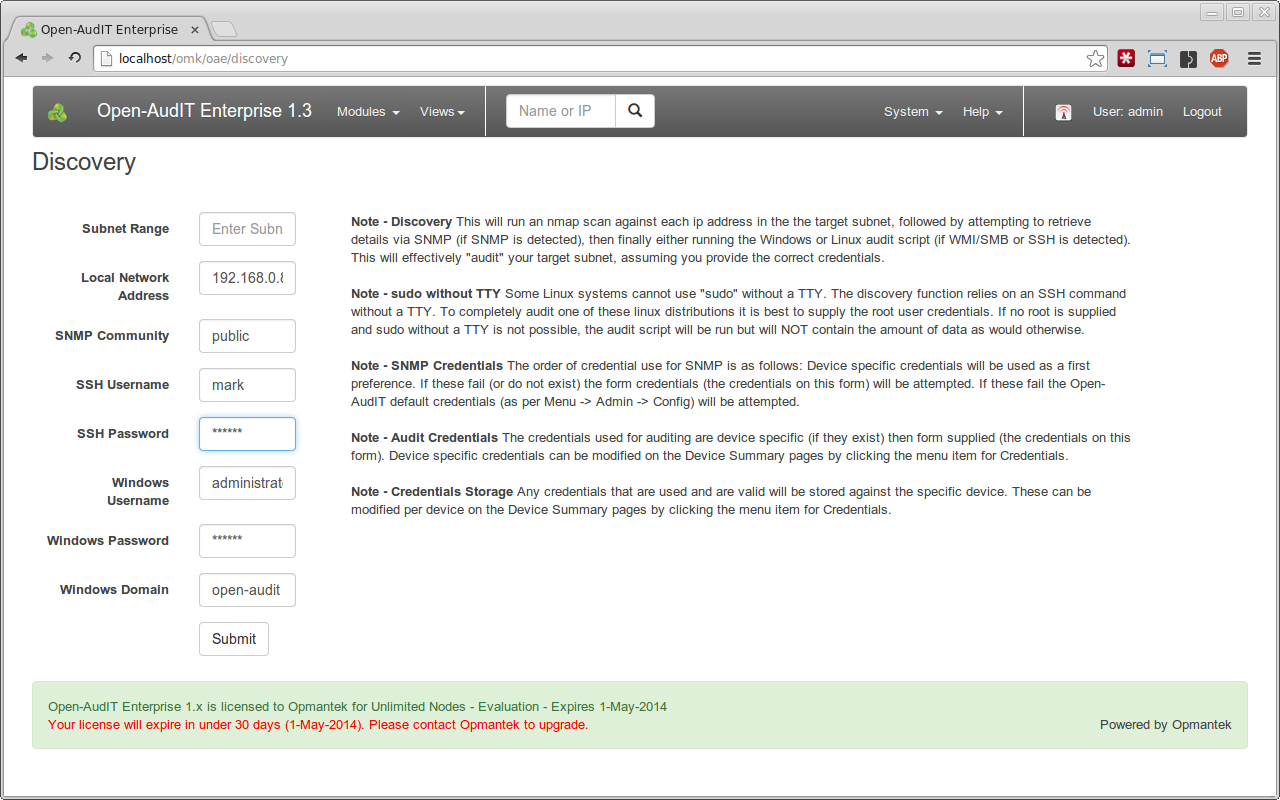 This form will pre-populate with your defaults (which you have just configured), but you can also override them with specific attributes for any given Discovery run.

Fill the form details and click the Submit button.

You will be redirected to the Logging page. You can refresh this page and see the progress of the Discovery run. Note that the first log may take a short while if the script has to determine if a number of target devices are active on a large subnet range.

NOTE - The logging can be quite verbose so there is now a feature to purge the log file at Open-AudIT -> Menu -> Admin -> Logs -> Purge Log.

You can set the log level in the configuration (menu -> System > Open-AudIT Basic Configuration). By default it is set to 5, but you may wish to temporarily increase it to 7 for debugging purposes.

As devices are discovered you should see them appear in the relevant Groups.

You can provide subnet ranges in any format that Nmap will accept (not including options). As above, if you provide a range that includes the / character, a network Group will be created if none exists and all devices found will be included in that group.

A simple BPMN diagram is below to help illustrate the basic process.

When you submit the required details on the Discovery web form, the Open-AudIT server initiates a script and returns control to the web interface - hence no waiting for the scripts to complete before the web interface is again available. The initial script uses Nmap to first ping scan the entire range and store the responding ip addresses. Then each responding ip address is scanned to determine basic information and if the ports for WMI, SSH and SNMP are active (also ports for http, https and telnet - but these are not used at present). The individual data per ip address is sent to the Open-AudIT server.

The Open-AudIT server processes the data and if SNMP is open attempts to scan the device. The SNMP scan will attempt to connect to the device using stored credentials in the following order: device specific credentials (which must be existing in the database), credentials provided via the Discovery web form and finally the default Open-AudIT credentials as per the configuration. If any of these work, they are stored against the individual device for subsequent Discovery runs.

Open-AudIT when running on a Linux server with ipmitool installed can query the IPMI interface (used as a remote access card in servers, sometimes called an ILO card). If you have credentials set, very basic information can be retrieved. This is only available on Linux based Open-AudIT servers.

NOTE - When auditing a Linux device via SSH, some Linux distributions do not allow sudo commands to be passed without a TTY (which we are doing). To completely audit one of these linux distributions it is best to supply the root user credentials. If no root is supplied and sudo without a TTY is not possible, the audit script will be run but will not contain the amount of data as would otherwise. Subsequent audits using root (or run locally using sudo) will therefore provide extra details about the system and generate several "alerts".